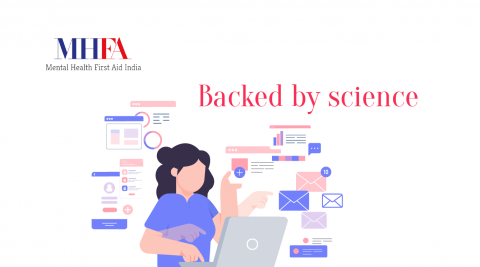 When speaking about scientific evidence, it is unavoidable to use technical jargon related to it. However, I will try to keep it to a bare minimum so that everyone who reads this can understand why MHFA is called an evidence based practice. Mental Health First Aid (MHFA) is supported by scientific evidence. Multiple scientific studies have been conducted by the scientific community to establish the usefulness of MHFA. One of the earliest studies conducted in Australia in the year 2002 among the general public shows that after undergoing MHFA training, the population gained the ability to recognise mental disorders by recognising the signs and symptoms, changed their beliefs about treatment of mental illnesses, decreased their stigmatizing attitudes towards persons with mental illness, and increased their confidence in providing help to someone with a mental health problem. Such scientific evidence is the differentiating factor between MHFA and other courses on mental health.

MHFA training has been taken up by different groups of people and has consistently produced positive results with regards to the knowledge, attitude and practice of those who attended the course. For example, MHFA training has been conducted in different settings such as workplaces, educational institutions, and general public. It has also been conducted among different social groups such as rural population, indigenous native population, refugees and migrant populations. Apart from this, MHFA has been administered across different age groups such as adults, youths and teens which have all proven to be helpful for these target groups. In addition to this, evidence on MHFA training keeps getting added from the international MHFA community such as from the USA, UK, Canada, Denmark, Sweden, Japan, Philippines, Hong Kong and many more other countries which have adopted MHFA. Such experiences not only show us that MHFA is a versatile and flexible training programme tailored to suit the different needs of the community but also an extremely helpful training programme for self-help and to help anyone around us in need.

Scientific evidence requires consistent results to be produced even when tested across different communities. As mentioned above, MHFA fulfills this and has produced evidence that it works across all populations and in different countries. In addition to this, a systematic review was done in 2014 in Sweden which put together the evidences from 15 research papers on MHFA and concluded that MHFA produced positive behaviour changes. So, it is evident that MHFA is not only helpful in taking care of the self but also improves supportive behaviour towards others. This sentiment is reflected by those who have undergone the training in MHFA India as well.

Evidence based practice has given the means to tailor the programme to the needs of specific countries but at the same time maintaining a standardized syllabus in all the countries which ensures the best quality of the programme. Evidence based programme also means that it is under constant scrutiny by the international researchers and the programme continually keeps evolving according to the needs of the community. This prevents any low quality or unverified information being added to the course. Since, the course is constantly scrutinised, any changes made to the programme will need to be added with proper evidence or proving in the community. This ensures that the maximum benefit from the programme is transferred to the learner.

With the power of proper knowledge, understanding the mental health of our self and our beloved ones becomes easier. It empowers us to provide better care to those we care about and understand what they are experiencing. Let us learn about mental health the proper way! 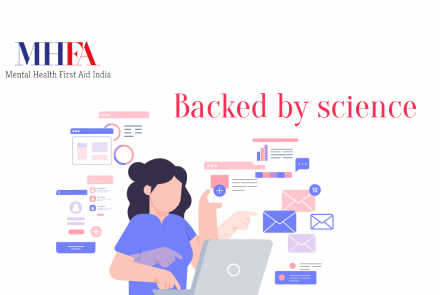